How Debra Prinzing is Changing the American Floral Industry 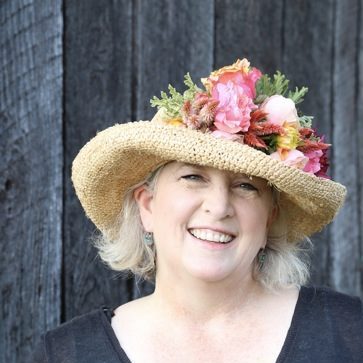 What better way to celebrate Valentine's Day ( one of the biggest flower holidays in the world ) than  a visit with Debra Prinzing, author, gardener writer, speaker, and floral designer. Debra is the  co-creator of The 50 Mile Bouquet and Slow Flowers (St.Lynn's Press) and the founder of Slow Flowers.com, ( a nationwide online directory of American flower farmers, florists, shops, and studios who design with American-grown flowers. 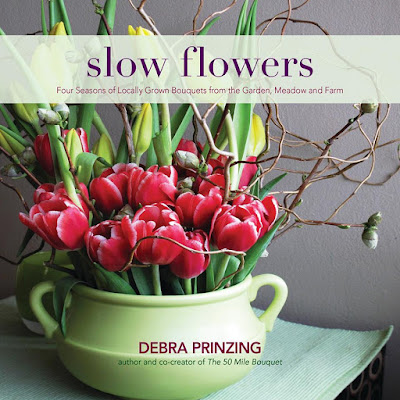 The excitement around sustainably grown, local flowers is buzzing through social media, the wedding industry and budding flower farmer/florists are popping up all over the United States in suburban backyards, farmland, sheds and urban alleyways. If Debra has it her way, ( and I believe she will ) soon everyone will be looking at flowers the way they once did when flowers were a given in the home garden right alongside vegetables and herbs.

Debra is here to tell us all about her flower journey and her vision for Slow Flowers in years to come. It's a nice long chat so grab yourself something yummy to drink and dig in.

D.H.  As a garden writer, what prompted you to write The 50 Mile Bouquet and Slow Flowers? What was it about the timing that was just " right "?


Debra- To answer your first question, as a journalist, I learn about topics by writing about them. I have had the immense privilege of spending time with so many amazing American flower farmers and florists who care about their sourcing practices – and in 2012 those conversations were documented for “The 50 Mile Bouquet.” That book was a six-year process that involved reaching out to flower farmers whenever I traveled and then following that thread to their clients – florists – to learn their stories. What prompted me to write T50MB? My collaborator, photographer David Perry, and I felt compelled to share the stories of the silent voices behind our flowers – and we created the book for love, not money. We couldn’t NOT create that book.
When it came to “”Slow Flowers,” a book project that is 100% my own designs, photography and text, well, that served as my “answer” to a frustrating conversation with a former editor of mine at a huge, prestigious, NYC publishing house. She said, “Organic and local flowers aren’t relatable to many people in the country. I can’t find them at the bodega on the corner of my upper West Side NYC neighborhood, so they must not be a mainstream topic.” It infuriated me and I started the Slow Flowers weekly bouquet project as a way to prove her wrong.
Timing? The timing was right for these two projects long before a publisher expressed interest. Yet, Paul Kelly of St. Lynn’s Press “gets it” – and because he cares about sustainable topics, he knew T50MB and Slow Flowers were books that he could produce for the marketplace of readers who care about sustainable living.


D.H.  How have these books changed you as a person, writer, gardener and pioneer of the slow flowers movement?
Debra- These two books launched my “platform” as a communicator – and for that, I am grateful. I have been a freelance home and garden writer since 1996 and in that period of time, I always wanted a specialized subject matter. But it took a lot of false starts to land on American Grown Flowers. I am truly passionate about the topic. From 2000 to 2008 I wrote a lot about garden sheds – and I produced a gorgeous book with photographer Bill Wright called “Stylish Sheds and Elegant Hideaways,” published in 2008. I thought my “brand” or “platform” was going to be all about sheds. But that never really had legs. In retrospect, I realize now that while I love the architecture and design of garden sheds, I’m not an architect or builder myself; I could never design or construct a shed. I could only point at fantastic structures and write about why they represented excellent or inspiring design ideas.
With flowers I’ve found my milieu. I can grow flowers in my garden; I can cut them and bring them indoors to arrange in a vase. It seems so much more personal. Slow Flowers has changed me into someone who isn’t just the impartial journalist who “observes” and documents the activities of other creative individuals. Instead, I’ve been afforded the opportunity to BE a creative individual myself. I find that so powerful. This experience with flowers has allowed me to have a voice and be an advocate for others whose stories I care about.
D.H. When did you begin to see the first signs of change or a shift in consciousnesses about American grown flowers and how they are grown, marketed and utilized?
Debra-That shift may have began with people like Lynn Byczynski writing "The Flower Farmer" (first published in 1997) and continued when Amy Stewart wrote “Flower Confidential,” which was published in 2007. Amy raised a lot of questions and stirred up the conversation about flower sourcing and imported flowers. She gave me her blessing to take the conversation to the next level and use my reporting skills to raise awareness about the positive ways people can “save” American flowers. Nearly 10 years later there is a true cultural shift taking place, which I find very exciting. There is so much further to go, but I believe more people than ever are asking “where did these flowers come from?” “who grew them?” and “what practices were used?”
D.H.  As a result of your books, new flower farmers are sprouting up all across the world. If you were to write a new book today that speaks to anyone entering the flower industry would you tell them?
Debra- Number one: Do not start planting seeds for the flower farm of your dreams until you understand the marketplace. Spend time introducing yourself to potential customers (florists, designers, retail channels for selling flowers) in your community. Don’t plant a single flower until you know someone wants to buy that cultivar or that color. Number two: Specialize in something uncommon. You can grow all the favorites – sunflowers, zinnias, celosia; all the summer annuals, but find something that makes you special in your own marketplace. Be the herb expert or the clematis expert or the flowering branch experts. Find that “sweet spot” that can set you apart and make you unforgettable (and necessary!).

D.H.~  I love your Slow Flowers Podcast shows. What inspired you to feature farmer/florists in this way?
Debra- Those who have heard my 1-year and 2-year anniversary episodes will know the answer to this question because Kasey Cronquist of the California Cut Flower Commission and the Certified American Grown Brand has been my anniversary guest for the past 2 years – and I fully intend to invite him on my 3rd anniversary episode, too.

Being on the West Coast has enhanced all of my Slow Flowers activities, but my focus going forward is to celebrate the fact that there are flower farms in all 50 states.
That’s one reason why I launched American Flowers Week in 2015 and why I plan to continue that social media-awareness campaign in 2016.
D.H. What's your favorite thing about being where you are "right now" in terms of your work, home and personal life?

Debra- Such a good question. One thing that I’m particularly excited about is that I’ve cleared my schedule for the past 3 months to really focus on expanding membership in the Slowflowers.com web site. There are so many fantastic flower farmers and floral designers listed on the site and I am committed to featuring as many as possible as Podcast guests and in the many PR projects and press opportunities that come my way as the creator of Slow Flowers. In a way, Slow Flowers serves as a PR agency that strives to support, encourage, and promote individuals (and their farms/floral studios) in this movement. The more support the site receives from subscribing members, the more we are able to do, such as creating visually-compelling Info-graphics and holiday-specific flower promotion campaigns.
D.H. What's next, in your wildest "field of flowers" dreams?
Oh how sweet of you to ask! I alluded to the American Flowers Week project, which I launched in 2015 (www.americanflowersweek.com), after my friends at the British Flowers Week project encouraged me to do so. In an interview with a local Seattle newspaper columnist this past fall, I was urged to disclose “my next book project.” And when pressed, I told the columnist that I am working on a book called “50 States of American Flowers.” I’m not sure how that will be manifested but I envision such a book as an inspiration for others to join in the American Flowers Week activities (this year, the dates are June 28-July 4, 2016).
D.H.  What would you tell a new flower farmer or floral designer just starting out?

Debra - Don’t compare yourself to what others have done. Instagram, Facebook and Pinterest show the fairy-tale part of flower farming and being a “farmer-florist.” There are those who portray the life of a flower farmer as bucolic/romantic/dreamy, when I know from those who are more honest how incredibly difficult it can be. I think people can strike a truthful balance between gritty hard work and the beauty they create.
Similarly, floristry is grueling work. The “pretty” often masks the agony. I am so grateful for those who honestly dispel these myths -- you've heard many in our Slow Flowers Podcast interviews.
Obviously, what I wish for everyone in the Slow Flowers Movement is to find one's passion and nurture its growth. If you can get up in the morning (like I do) with excitement about jumping into your creative work . . . . you know you are blessed.

Also, create community and support one another. Competition is fine in terms of driving you to achieve your best and most beautiful work. But to succeed at the expense of another fellow flower farmer or florist is soul-sucking. There is no “gain” by diminishing another human being. And, I truly believe that each of us in unique enough to stand alone in his/her path without harming or hurting a fellow flower farmer or florist. Flowers are not the cure to cancer or rocket science. They are things of beauty, and likewise, we should be celebrating beauty, nature, ecology and women entrepreneurs instead of feeling threatened by another’s success.

I loved having Debra over to Dandelion House to talk all things local flowers and hear her vision for the future of Slow Flowers. I'm feeling inspired as ever to keep moving forward with my flower farm dreams and I hope you are too!

It's going to take all of us to bring flowers home, back to American soil and into the hands of our customers, friends, and loved ones, right where they belong.

Deb
Put Down Some Roots and BLOOM!