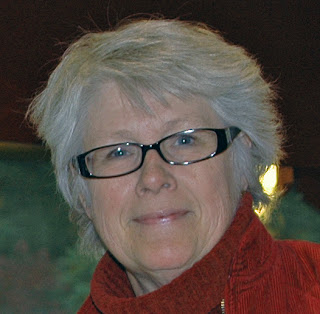 My Aunt Nan listens to her inner voice and creates teddy bears that have a history. It wasn’t always so.
Nine years ago, she walked into the back yard and it was like a voice said, “you’re going to need a place to go when you retire.” Although she wasn’t ready to retire for a number of years, the idea of a “place to go” became a project for her husband, Harlan. “There was an old apple tree in the corner of the yard and, on that spot; he built a studio for her. Their daughter named it 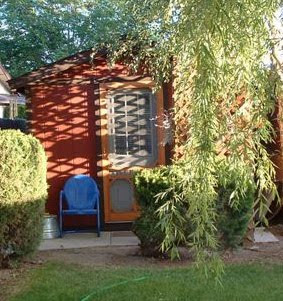 
It has all the comforts of home…lovely to work there even when the snow is falling and the wind is howling. She is as “snug as a bug in a rug”!
In the beginning she had no idea what she was going to do in The Apple House, but she knew she was going to do something. So, she moved her forty year old sewing machine to her new studio, added some shelves and rugs and a comfy chair and foot stool and sat down to think about what to do next. She recalls my grandmother asking her what she was going to do…having absolutely no idea, she told her she was going to make critters! She was unaware that her words would come true, but not for some time. For three days my aunt sat in The Apple House feeling bad because her husband had spent the money to build her a wonderful “retirement home” and still she had no idea what to create. Finally she decided to make a child’s corduroy summer hat, just to be certain she remembered how to read a pattern. Then, she began to make designer pillows and consigned them to three shops and they started to sell.


One day she was watching a television program of a woman making a teddy bear. She thought, “I bet I could do that”! 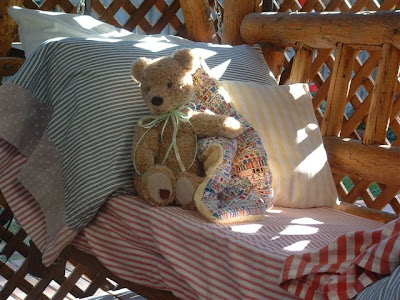 She stopped making pillows and started making bears. The bears are cut from scratch and come in all sorts of personalities.


My aunt says, “The bears tell me what their names are going to be and what they’re going to wear… whether they need a hat or a ribbon. They come with their own history and, at first; I would just tell people a story about their background. Then the bears began “telling” me poems.


Now, when a new bear is ordered, it is with the understanding that a poem is included. Each bear arrives at his/her new home with a poem tucked under his arm for safe keeping. 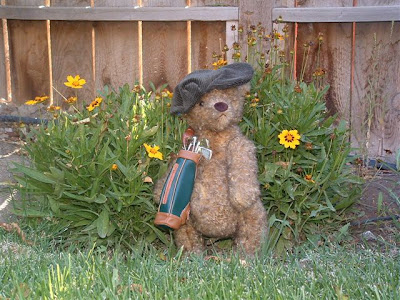 
My palms were hot and sweaty,
As I put on my golf shoes,
You know I felt like running,
But I’d been in all the news.
They really thought I knew my stuff,
An illusion it would seem,
Instead of being happy,
I was stuck in a bad dream.
I had my cap,
I had my clubs,
I had my caddy too,
I knew they all were waiting,
Just to see what I could do.
I marched out of the locker room,
I made it to the green,
My little knees were knocking,
A coward it would seem.
The gallery went crazy
They hooted and they yelled,
I knew inside that I was doomed,
The victim of a spell.
And then I started thinking,
On just how much I’ve learned,
I closed my eyes,
I smacked that ball,
My little heart was sinking.
I guess I really let ‘er rip,
I was aiming for the sun,
I missed the lake,
I missed the sand,
I got a hole-in-one!
Sometimes life smiles upon us,
Turns out better than one thinks,
So when you get your hole-in-one,
Remember…they all get drinks!
5/29/06
Karen J. Dixon
News of the bears spread by word of mouth. Soon, she had orders for 18 bears and was still working full time. Her bears live all over the country now and on Halloween 2004 she retired, knowing full well what she would be doing in her cozy studio. 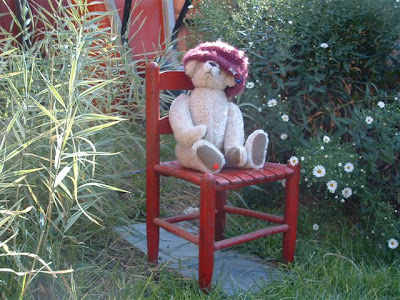 Have you ever sat and watched the clouds,
As they went floating by.
Just laid down flat upon the grass,
And looked up to the sky.

Have you ever watched a butterfly,
The color of its wings.
Have you ever really listened
To how a Robin sings.

Have you ever wandered in the rain,
The drops fell on your face.
Just took delight in how it felt,
No hurry…slowed your pace.

Have you ever sat down on the beach,
And let your thoughts run free.
And closed your eyes,
And felt the wind,
Happy…just to be!


The lights in The Apple House are on most evenings, a yellow glow shines through the window on to the walk way leading to the front door and if you listen, you just might be the first to hear a new verse or two being whispered to my Aunt Nan. Don’t worry, she won’t keep it to herself…she loves to share! 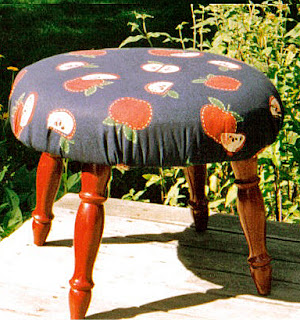 I re-vamped this yard sale foot stool for her as a studio warming gift. It rests at the foot of  her comfy red and white checked wing back chair in The Apple House!


Aunt Nan tells me it's just right for propping up her feet and daydreaming!

What  inspirations,whispers, or LOUD knockings have you LISTENED to lately? It's never too late to follow the tug of your heart!

Adorable!!!! Love the bears, and the Apple House.

What an endearing and touching story. What a beuatiful calling to find in the autumn of ones life, I truly hope my fall will be like that.
I love the Apple House and the teddy bears, an I am so inspired by your aunts success as it shows it is never too late to start again.;) Even if it is when one retires.;)
Have a lovely Monday,
xoxo

It's magical...isn't it - love that! The photo of aunt Nan is great too.
Love you,
Aunt Retts

I love my Aunts Bears and her poetry!
It's hard to believe she used to baby sit me and here I am blogging about her amazing creativity and ability to " listen " all these years later...
I bet if you look closely at your families creative endeavors, you'll find the apple doesn't fall too far from the tree when it comes to creative expression!
ITS SIMPLY EVERYWHERE!
THANK YOU Nan for sharing your talents with my friends here at Dandelion House!
Love,

What a sweet story about your aunt. I love her little studio and the name of it. She's so lucky to have such a special place to create. Her bears are adorable.

Deb, what a heart-warming story! It should be in Victoria Magazine! Love the little house, the bears and your aunt's poetry! What a talented family you have!

AHHHHH, what a wonderful story this is. Making bears AND making dreams come true, not only for herself, but also for all her bear loving friends.

This is lovely and I a so happy to have started my day with tea, sunshine, and your Aunt Nan. Wish I had an aunt like her.