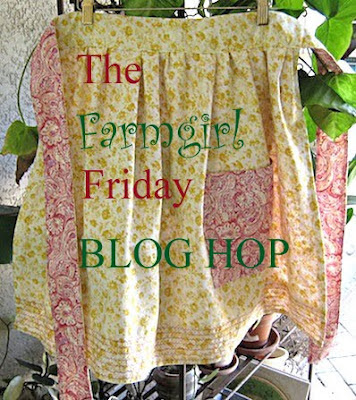 Welcome back farmgirls! I don't want to admit it but I was almost positive I could smell Fall in the air last week. And, I'm beginning to daydream about inside painting projects that I want to complete before the time change goes into effect. I know!!! What am I thinking? There's still a whole month of Farmers Markets ahead and two September weddings to design flowers for. I'm not the least bit ready to say goodbye to summer, I just find it interesting how we humans are so biologically tied to the seasons don't you?
Debbie ( my farmgirl co-Hort) and her hubby are knee-deep in a DIY kitchen remodel right now and watching green tomatoes on the vine for any signs of blush pink or red tinges.
They're counting the days till harvest time.

It's time for another great round up of farmgirl posts!
Let's see what cha got!
Have a great weekend and we'll see you on the hop!

Posted by Unknown at 9:55 AM No comments: 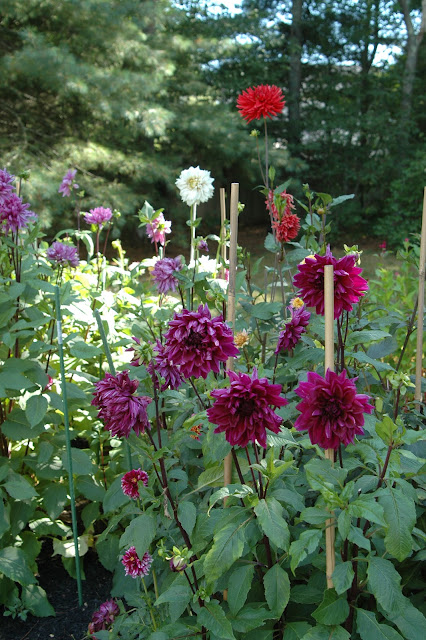 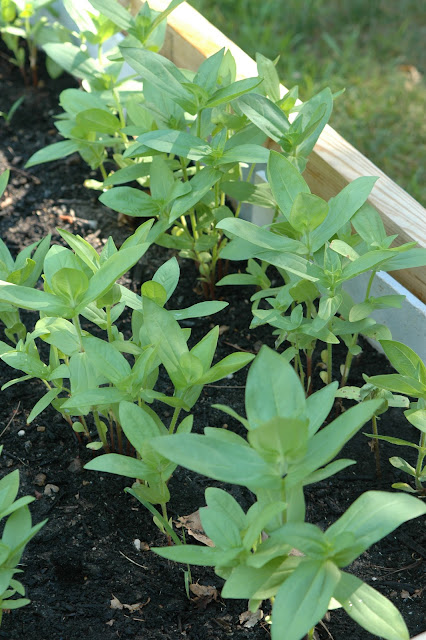 Posted by Unknown at 8:08 AM No comments: 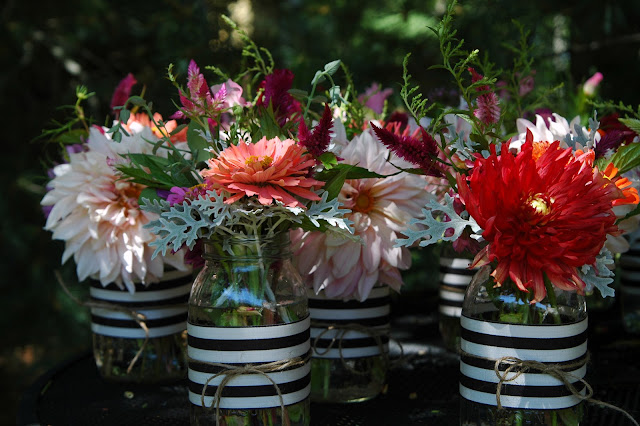 Dear friends,
I feel as if it's been forever since I sat down to say howdy. Life as a mom and writer is busy enough. Toss flower farming into the mix and now we're talking B.U.S.Y. but it's a beautiful busy and I love every minute of it!
We've ( my daughter and I ) been peddling our petals at the local Farmers Market and we just delivered our first wedding order yesterday! 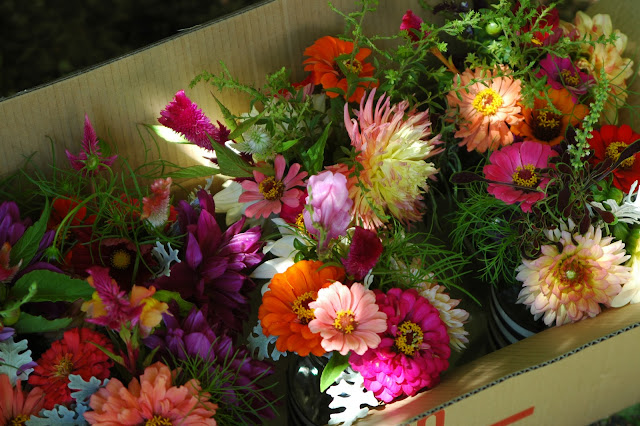 Today I'm sharing the wedding centerpieces I made for the bride and groom's farm venue wedding.The bride chose a modern/rustic theme for her mason jar centerpieces and wanted to incorporate locally grown flowers into her wedding so we were a perfect fit!
I love doing arrangements in mason jars because they are so versatile and most flowers look happy in them.
My bride provided the jars and the ribbon and I did the decorating. It only took about an hour to cut the ribbon to size, glue it on and tie on the twine bow at the last. I simply measured the ribbon to fit the center of the jars then cut it to allow a half inch over lap, just enough to add a few drops of Quick Dry Fabric Fusion. This stuff is amazing!!!! It works like a charm. It's truly fast drying and fabulous on fabric.
Once the ribbons were secured on the jars I cut lengths of twine 27 inches long to tie around the center bows. 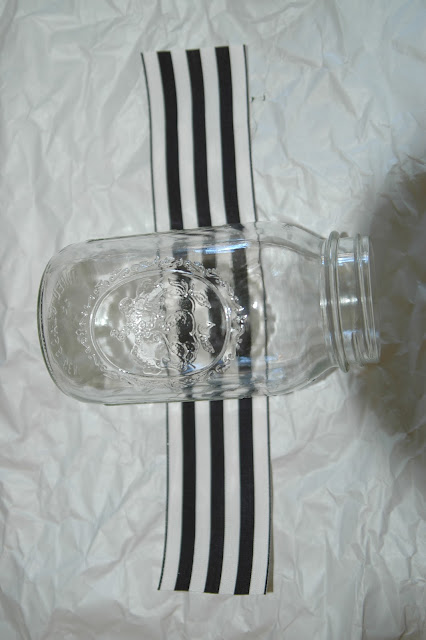 FYI. I found it easier to adorn the jars before adding the flowers. Makes sense doesn't it? Especially if you are doing any gluing or you have to lay the jar down for applying ribbons, beads, burlap, lace, etc. 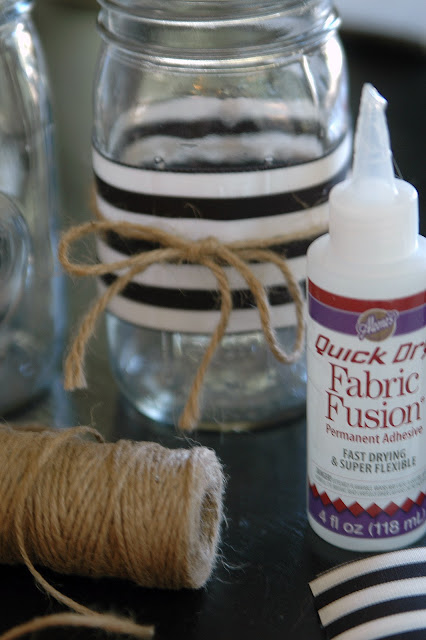 I always cut flowers early ( before 8:00 am ) before the sun has a chance to start warming them up and place them immediately into clean buckets of fresh water.

I used a mix of seasonal flowers for the centerpieces. All of them came from my backyard except some golden rod still in the bud stage that I foraged from the backyard at our cottage. Thank goodness I did, because I'm low on filler material this year and the wispy stems of the golden rod added just the touch of rustic romance I needed for the finishing touch on the centerpieces. 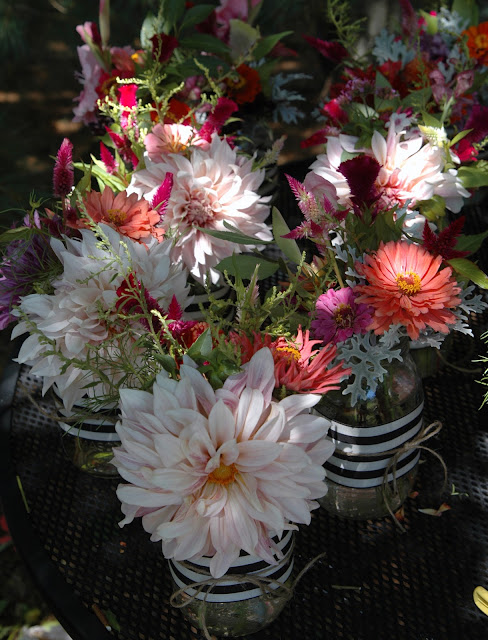 I have to say, I think the black and white ribbon is striking with all of the flowers.
Once the centerpieces were finished I packed them into sturdy cardboard boxes and my daughter and I packed them into the back seat of her Vintage Ford 250 Truck and hit the road. I was calm as a cucumber after the delivery but I woke up very early this morning with butterflies in my stomach worrying about the flowers. Were they too squished in the box? Did any of them wilt in the night? Probably not.They withstand much more abuse sitting in the sun all day at the farmers market and they were only in the truck (not air conditioned ) for an hour before going to an air-conditioned house. Still, I worried but a Facebook comment from my bride this morning settled my nerves. They are fine and right about now they are probably sitting pretty atop her tables at her venue. They've promised to send me photos from the wedding photographer! I promise to share them with you as soon as I get them! 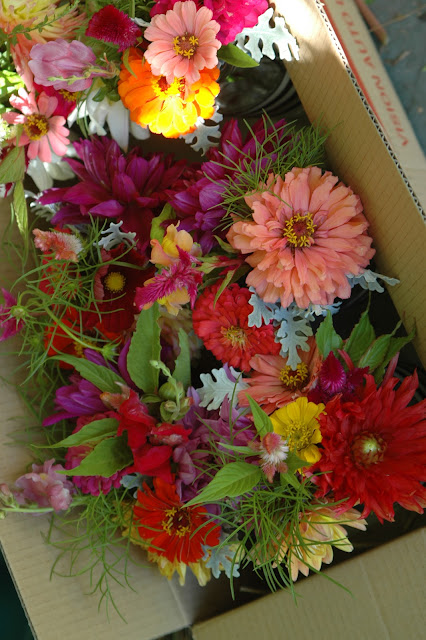 I've been a gardener for 25 years but flower farming takes it to a whole nuther level. I've always dreamed of having a farm...Who knew I would find one in my own backyard?

Posted by Unknown at 9:23 AM No comments: