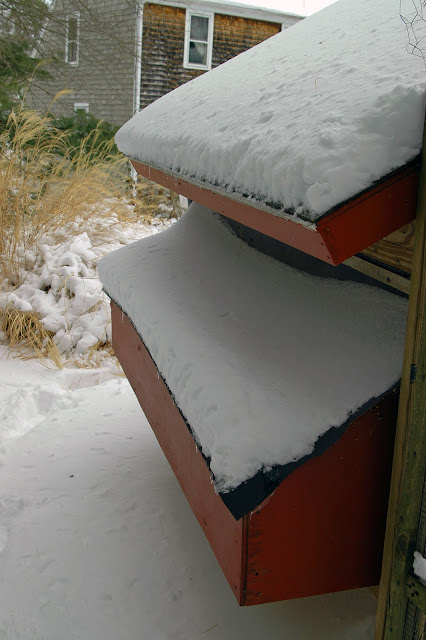 Do your chickens like snow? Ours don't. I wish I knew what they were thinking when they peak out into the run to find it covered in that strange white stuff that falls from the sky! One thing I know for sure is that they WILL NOT come out of the coop after a snow storm for ANYTHING. If one of us doesn't clear a path from the house to the water feeder they'll sit inside ALL day. Today I trudged through the snow out to the Hen House ( CAMERA IN HAND ) for another lesson in Chicken Keeping 101. Here's how it went...
WARNING! Lots of photos ahead! 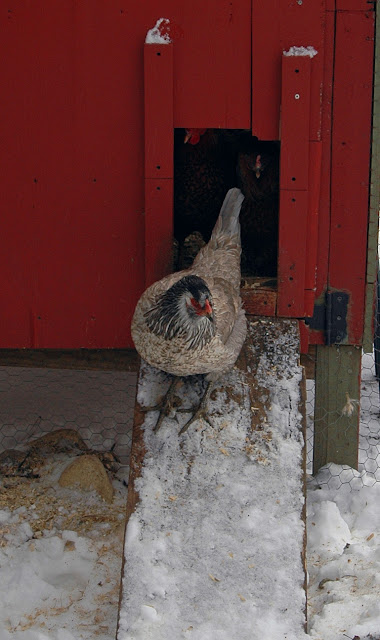 Stevie the" rebel chick " was the first one out! I wasn't surprised. She was always escaping before we clipped her wings. 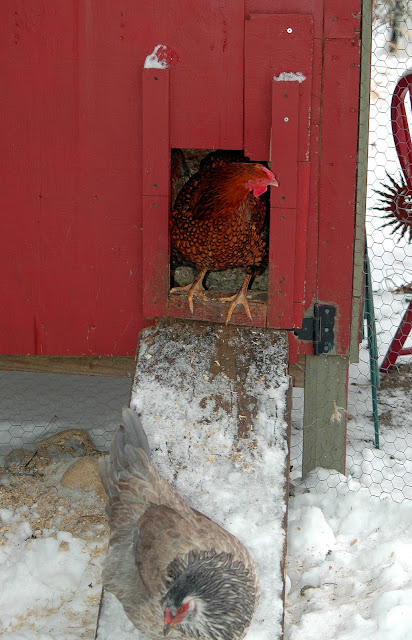 Next up was Lucy. She was very curious but held this pose for a few minutes before deciding the coast was clear! After all, Stevie had survived all the way to the bottom of the ramp. Maybe it would be okay for her too? 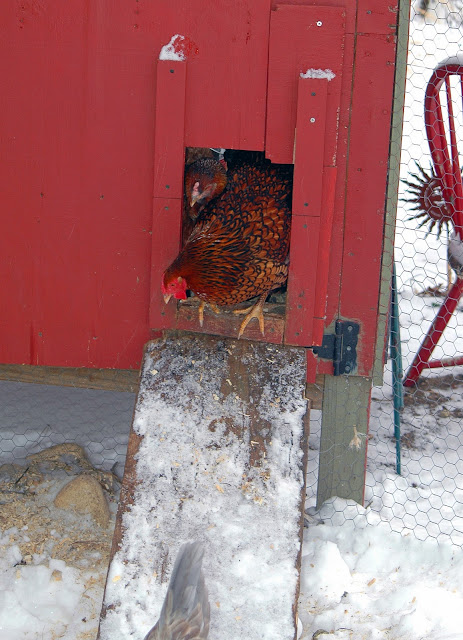 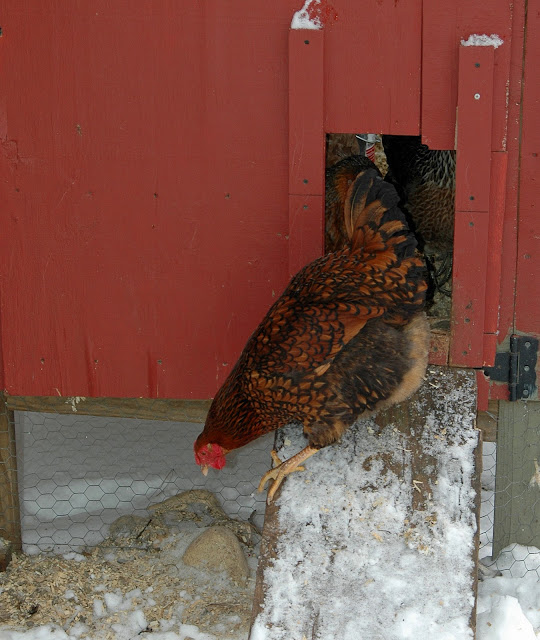 Oh, just go for it already! ( says I, as I'm crouching with my bum in the snow getting colder by the minute ) 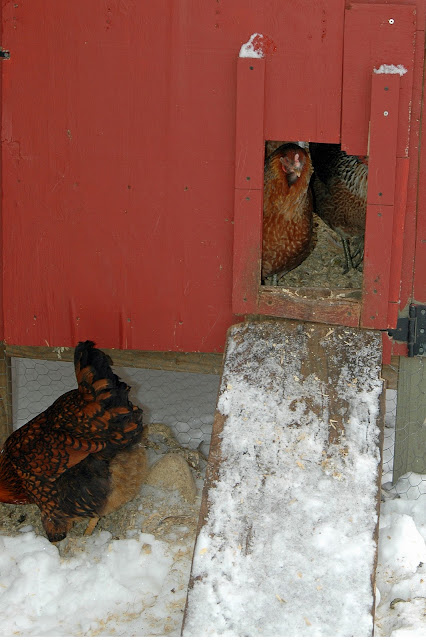 Finally she makes the leap! Penny and Gladys are waiting in the wings still thinkin' about it. 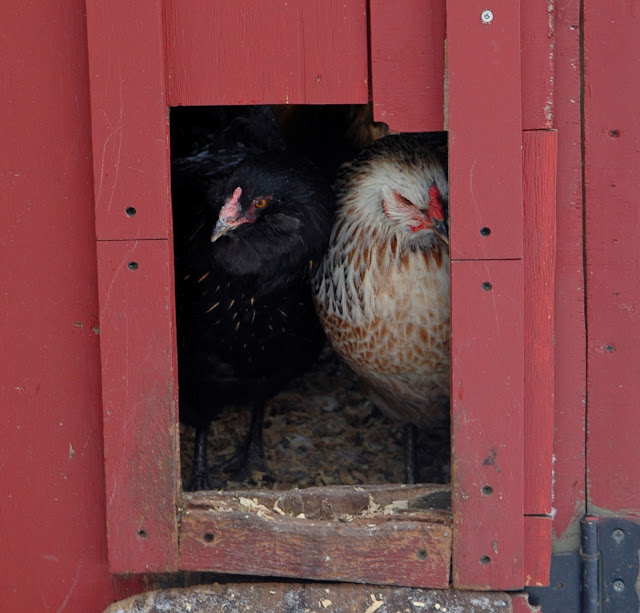 Liza pushes her way forward and joins Gladys in scouting things out. 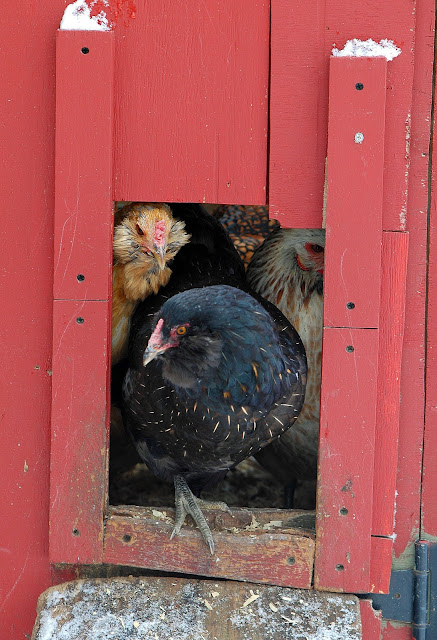 Liza decides to make run for it! 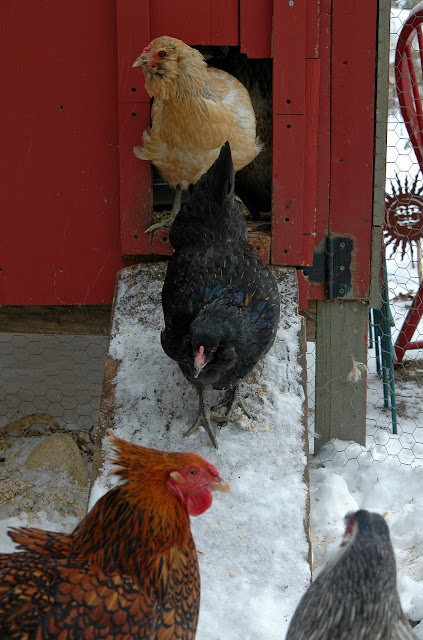 She's quickly followed by Blondie while Stevie and Lacy (who just fluffed her feathers to help cheer them on) wait at the bottom of the ramp. All the while, I'm still crouching, and calling to the girls in my best chicken voice... Here, chic chic chic... come on girls..... chic chic...here pretty girls.... chic chic chic...when suddenly I feel something hit the front of the camera then skim the top of my head! 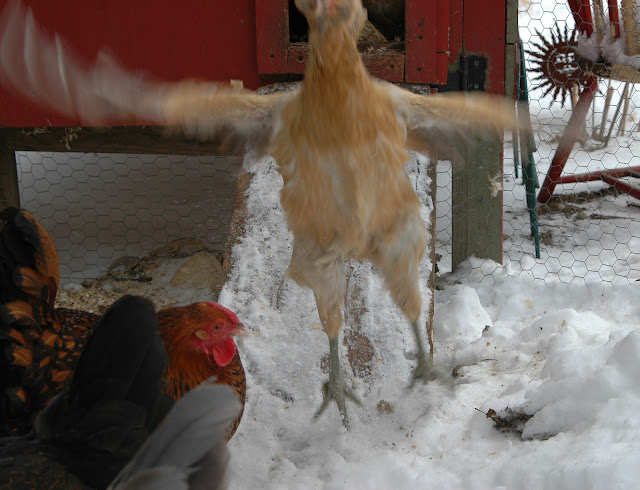 I'll give Blondie credit. That's one way to avoid the snow! 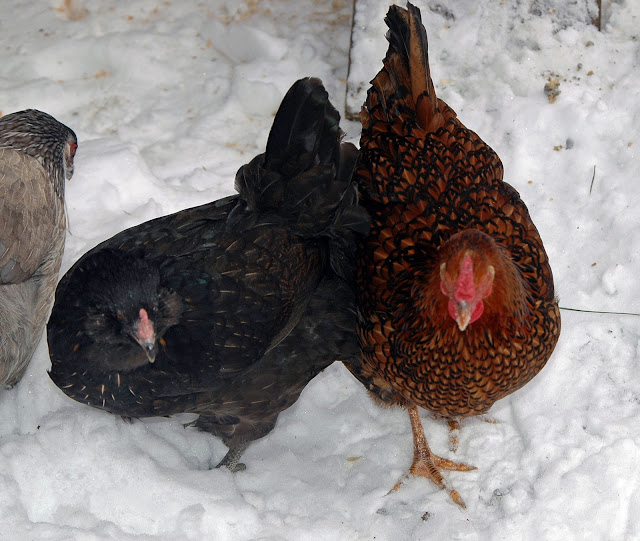 I'm pretty sure these two are in cahoots! I'm not sure what they're planning but I know they're  definitely up to no good! Liza's ( the brunette ) the more adventurous one. I think she might be trying to talk Lucy into getting a tattoo. I overheard her say, "  nothing too flashy, just a little something around the ankle would be nice ". 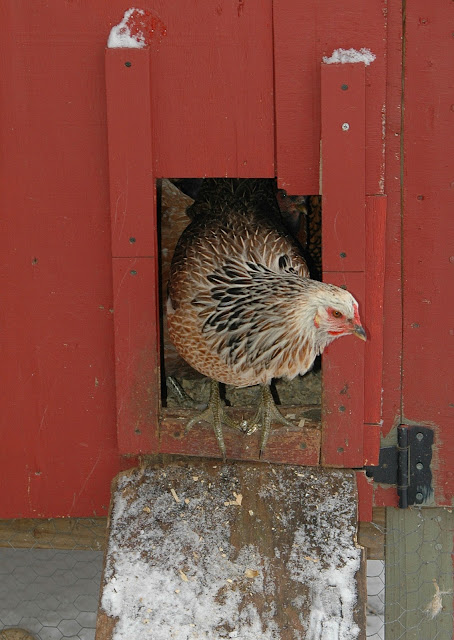 Gladys is working up some courage after watching the other girls. 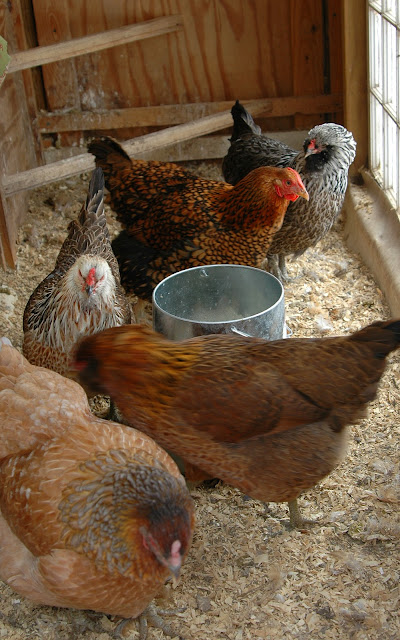 But, she never made the leap! She stayed inside with the other " chickens "
Chestnut, Hazel, Lacy Lou, and Penny. Well, at least I know they aren't headed off  to the nearest tattoo parlor!
( Not that there's anything wrong with that  )
*The best thing to do for your girls ( and boys ) when it snows is to clear a path for them. If they can see some bare ground, they'll feel much more comfortable about coming out of the coop. Make sure you give them plenty of fresh water every day even in winter. We've still not invested in a heater for our water feeder so I bring it out fresh every day. I don't mind. It just gives me another reason to go out for a visit and make sure they are all doing okay. I also add more shavings to the coop for extra warmth during the colder months. Picked some up today!
So, tell me. Are your chickens " chicken " too when it comes to snow?
I'm off to dosado with the Barn Hop folks!
PS. no human, chicken or camera was injured in the making of this post!
Posted by Unknown at 7:11 PM

LOL They're so funny! We haven't had any snow to speak of this year (ugh!) but last year, it was hilarious how my chickens were afraid of it! We ended up getting so much last year, tho, that they finally got used to it.

I love your chickens. Are they Wynadottes? I am about to order some chicks this week from Ideal Poultry, unfortunately several of the breeds I want aren't available at this time.. argh.

My girls are definitley chicken. Today they hung out in the house or in the door to the house.Nike, who's usually regulated to the house, was kicked out and got the whole run to herself including the covered area. She loved it but stayed away from the snow. It chills their feet.

Lynnie,
Tow of our girls are wyandottes. the rest are araucanas.

I so enjoyed this post. Thank for the information about the snow. We are suppose to get snow tomorrow. I now know what to do. Thank you, I never would of thought to clean the path.

We haven't had snow since having chickens... (not this year anyway)
...but my chickens are just chicken lately ...
Chickens are funny little creatures aren't they?
loved your photos of your girls... take care
Pat

Oh, I am not surprised, it must be cold for their feet.;) I tried to get our cat Sammy out into snow this past weekend, but he refused.;)
xoxo

My girls don't know what snow is! But I feel sure that they would be terrified of it.

Love this...our chickens HATE the snow, and won't set foot in it! They will come out in the rain, the wind, the cold, but snow? Forget it. LOVE the picture of the flying chicken...great shot!

my husband-an ole thyme Vermont farmer from way back!- says they are snow blind. So I have several bags of leaves and put down a layer just outside their door after each storm-then they venture out! They do love the fresh air! Or I lay down some straw if I don't have the leaves! They do love to be out! Get "cabin fever" just like we do!
~~Rain

What a great post! The flying chicken cracked me up, great that you were able to get her picture! We never get enough snow here for the chickens to really experience it but I will remember to clear some ground for them if we do. Thanks!

Rain said...chickens are snow blind.I hadn't heard that before. Thanks for giving me yet another thing to look up on google!

Love the flying shot! Mine do go out in the snow if it isn't too deep. Once the ducks have it packed solid so they don't sink, they'll venture out for a little bit. They are less happy with the cold than the snow.

Thank you for a good laugh! I loved all of your photos. I never appreciated our chickens growing up. Your are so beautiful. I also like the flying shot. Ouch. I enjoyed the post. Thank you.

Your chooks are absolutely beautiful! My girls haven't even seen snow yet because of this odd winter we're having. I can't wait to see how they react.