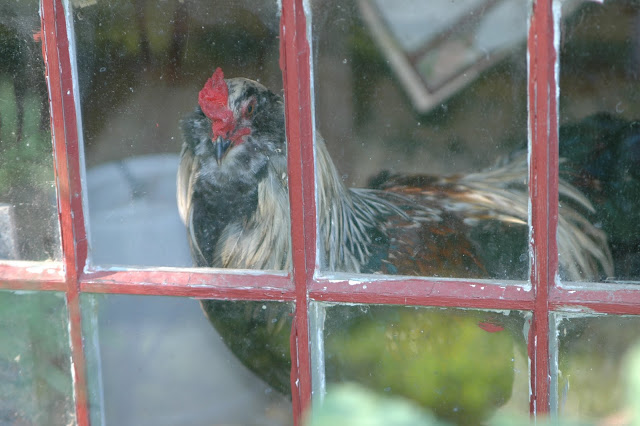 Who me? Yeah you Rodeo and your buddy Rudy Roo too! Sorry fella's but today your shippin' out on the next train west. Your going to THE FARM!! What's that you say," you're already on the farm "? Yes, that's true, but you can't stay. The girls have had it up to their tail feathers ( what's left of them )  with your fresh behavior, and constant cock a doodle doin' all hours of the day and so has the head homesteader here too... Papa Boz needs his rest and Mama Boz has made him suffer long enough. Not to mention what the neighbors have been sayin'! 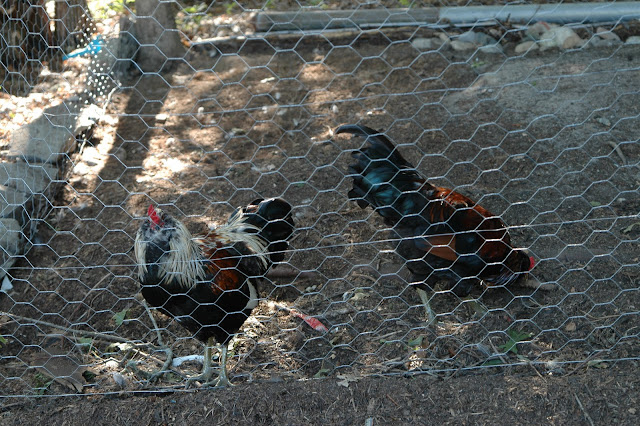 Dear friends,
That was the conversation I had with " the boy's"  last Thursday after I made a call to the local slaughter house FARM! It took me a while to come around but the hard truth is this. We are a backyard hen keeping operation. Our little flock ranges in size from 13- 8 with 5 or 6 being a perfect number for keeping harmony in the hen house and fresh eggs in our frig. When we found out we had two guy's in our last bunch I was excited. I had never had a rooster before and  I wanted to have that experience. Well, let's say, I've had  it in more ways than one! I've come to terms with my chicken keeping limits and I've toughened up my farmgirl heart a little too. When it came time to try and re-home the boys I realized that it's pretty difficult to re-home them because they often become more aggressive in a new environment. I didn't want to wonder if they were cared for properly or not, so we decided the only way to really know what their outcome would be was to, well.... um...plan it ourselves... Rodeo and Rudy are no longer with us in feathered form but they ARE still here, in our freezer, frozen. I'm waiting for the perfect cool September day for a nice Farm Fresh Roasted Chicken dinner... right from our own backyard coop!

It wasn't easy to say goodbye at first, but I'm certain if you asked The Cottage Hens what they think, they'd be cackling up a storm telling you they were happy to see them go and asking why it took Mother Hen so long to come to her senses!  Especially Lacy Lou and Hazel... For some strange reason I've yet to figure out, the boys wouldn't let them out of the hen house for about two weeks. Each time they would try to get out into the run for scraps or food and water one of the guy's would chase them back inside the coop. I had to feed them separately to make sure they were getting enough to eat and drink.They were also starting to get getting a little pushy with me too!  I guess I have a lot to learn about roosters. They can be quite territorial which is good when there is a burglar in the yard, but not so much when Mother Hen is just trying to do her daily chicken chores.Yep, things were about to come to blows between me and the boys...!

I'm happy for the remaining " girls " and  since the fella's hightailed it out of here the stress level in the coop is about zero!  There's been lots of dirt baths, fluffing and preening, and in general happy clucking sounds coming from the Little Red Hen House. I think every one's happy now with the exception of Rodeo and Rudy of course.

The most important lesson learned in raising our roosters for the short time was this. Mother nature has a reason for everything, and roosters have a job to do. And, they want to do it ALL THE TIME. That being said, if we had ourselves a real homestead away from neighbors, I think I would definitely keep roosters, so we could raise chicks. I would also research the best breeds for raising chickens for meat. I would alternate them in free ranging grassy areas and when they were of age for eating Papa Boz says he would be able to take if from there, if you know what I mean... Who knows what the future holds for us in the way of an actual location for more in depth homesteading. I definitely feel closer to having a sense of how things used to be done " on the farm " and I must admit, it's a good feeling opening up the frig and seeing two roasting chickens inside that we raised!

FYI: It cost 5.00 per bird to have them " prepared " and sent home fresh. Papa Boz brought a cooler with plenty of ice for the trip home.

Before they went, we all said our goodbyes and our thanks to "the boys". They weren't that bad...were they?  Don't answer that!

I'll post the recipe when I roast them! ( if it turns out well enough that is )

Email ThisBlogThis!Share to TwitterShare to FacebookShare to Pinterest
Labels: The Cottage Hens

Can you hear me laughing? That is hysterical! We live and learn don't we :)

I understand your feeling about the Rooster. They also love picking out the feathers of the chickens. If I need more chickens, I will buy them from a farmer.

Well honey, if you're going to be a farm girl, well, you have to face the rooster music.

We have two roosters, quite by accident as well. Currently they are a beautiful addition to our flock. Hopefully it will stay this way... I think your decision was a good one, good for you!

Ha! this gave me quite the chuckle. I guess that's all part of it,huh?

If you can't crow you might as well ...just die.
I hope to learn all this chicken-sense some day.

Glad you shared the story. Pat

We had an Aracauna rooster that crowed 24/7...nonstop! I finally told my husband that one of us had to go - either me or the rooster! I'm thankful to say that I'm still here :) Love the blog!
debbie

It is a good feeling to know where your next chicken dinner is coming from! AND you know that these guys were raised in a good, healthy environment as opposed to some giant chicken conglomerate! Good for you guys! :)